Close up of Calhoun

Grandma Moses’s bucolic landscapes with sturdy farm buildings, rolling hills, and small, simply rendered figures evoke a world that existed primarily in her imagination. She felt strongly that art should present only pleasant scenes and subjects, asking, “What’s the use of painting a picture if it isn’t something nice?”

Calhoun depicts workers bringing in the hay from fields, a favorite subject among Moses’s many harvest scenes. The title may refer to Calhoun County, West Virginia, not far from the farm in Virginia where Moses and her family lived around the turn of the last century.

A self-taught artist, Moses adapted landscape compositions from greeting cards, magazine clippings, photographs, prints (such as Currier and Ives), or she imagined scenes from stories she had read.  She described painting outdoors as “impracticable” and focused instead on “whatever the mind may produce.”

Moses developed a tipped perspective that allowed her to give greater attention to the backgrounds of her scenes. In Calhoun, lines of trees and neat hedgerows laid out in a quilt-like pattern extend toward the top of the painting. The work’s yellow-green tonality is characteristic of many paintings by the artist; she often created several works at once, using the same palette of paint in order to economize on materials.

Paintings by Grandma Moses provide nostalgic glimpses of daily life in rural New York and Virginia. A self-taught artist, she did not begin painting until her late 70s.
View Profile 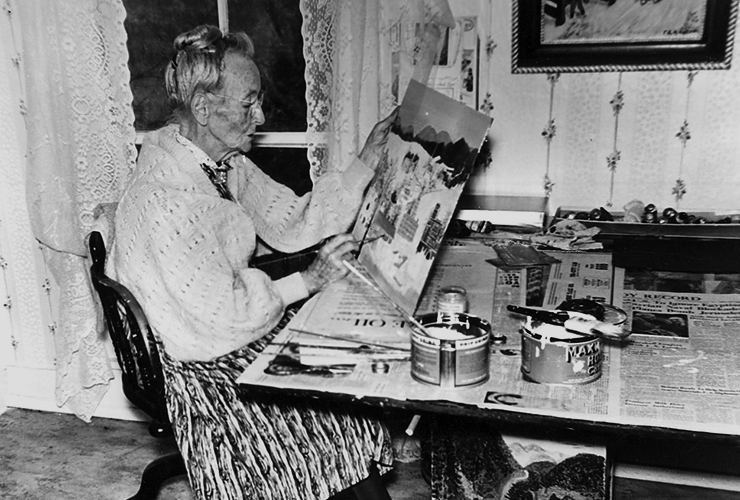