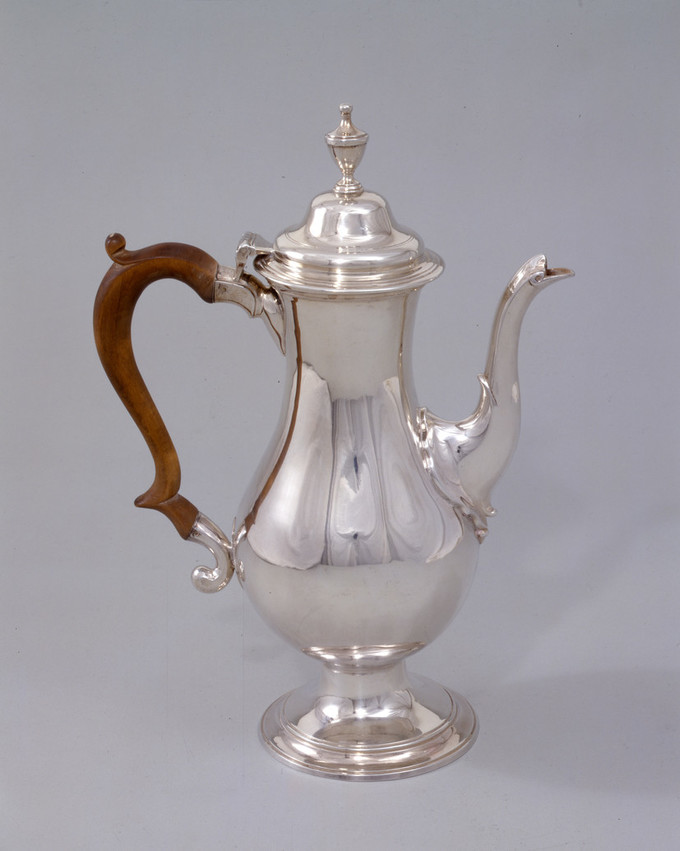 Hester Bateman inherited her silver workshop after her husband’s death in 1760, and it was only then that the business began to flourish. The Bateman workshop produced domestic items—coffee pots, tea urns, cruets, teapots, salvers, goblets, salts, sugar tongs, and flatware—integrating technological advances with classical design to attract a burgeoning middle-class market. Working in an industry dominated by men, Bateman and her workshop were incredibly successful, and she remains known as one of England’s finest silversmiths.

Since coffee and tea were never served at the same time in the 18th century, the shape of each vessel developed in a distinct direction. Deriving from an early cylindrical form, akin to a lighthouse, coffee pots are typically taller than teapots. This coffee pot features a swan-neck spout and a wooden scroll handle. Its body is shaped like a baluster, and it is balanced on a spreading foot base. Its tall cylindrical body is also akin to the shape of an urn, a hallmark of the Neoclassical style, which was inspired by the forms and designs of ancient Greece and Rome. Urns were common vessels in ancient times and thus became a popular Neoclassical silver motif.