A two-screen projection, After the Rainbow (2009) combines film clips from The Wizard of Oz (1939) with clips from a 1960s television special starring Judy Garland. Instead of the famed twister taking Garland’s Dorothy character to Oz, the young Garland is transported to the future where she meets her disillusioned older self. After the Rainbow blends the fantasy world of cinema with the complex reality of Garland’s life.

After the Rainbow is the second work in Soda_Jerk’s Dark Matter series, an ongoing cycle of video installations that examine experiences of time and memory and how these can be mediated by moving image technologies. Soda_Jerk calls each work in the Dark Matter series a “séance fiction” as the installations present an encounter between the younger and older selves of a deceased screen star. By borrowing, re-sequencing, and manipulating clips from films and television, Soda_Jerk demonstrates how sampling can even serve as a kind of re-animation of the dead.

A two-person art collective, Soda_Jerk creates video installations through sampling, a technique that involves the appropriation, collaging, and remixing of images. Merging digital audiovisual clips and celluloid film, Soda_Jerk constructs new narratives that reflect upon historical events as well as contemporary debates about copyrights and image accessibility. Formed in 2002 in Sydney, Australia, Soda_Jerk is currently based in New York City.

For a preview of the video installation, watch this excerpt of After the Rainbow.

As part of public art project 5×5, admission to After the Rainbow is free. 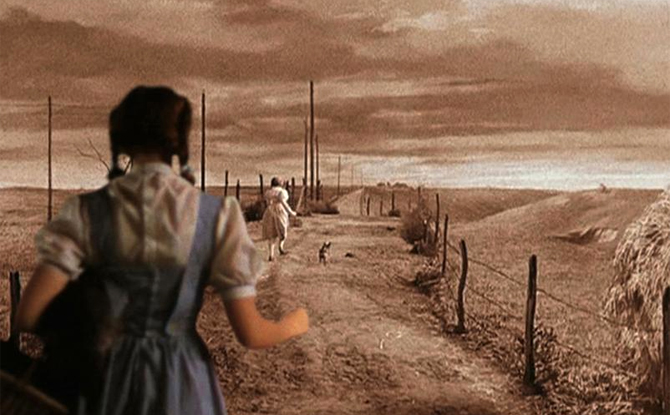 Soda_Jerk, After the Rainbow, 2009; 2-channel projection on screens back-lit with fluorescents, 5 min, 42 sec.; Image courtesy of the artists

Soda_Jerk: After the Rainbow is part of 5×5, a project of the DC Commission on the Arts and Humanities, and is presented in collaboration with the National Museum of Women in the Arts. The exhibition is part of the multi-work project 5×5: (home)land, curated by Justine Topfer.