Close up of A Gentleman’s Table 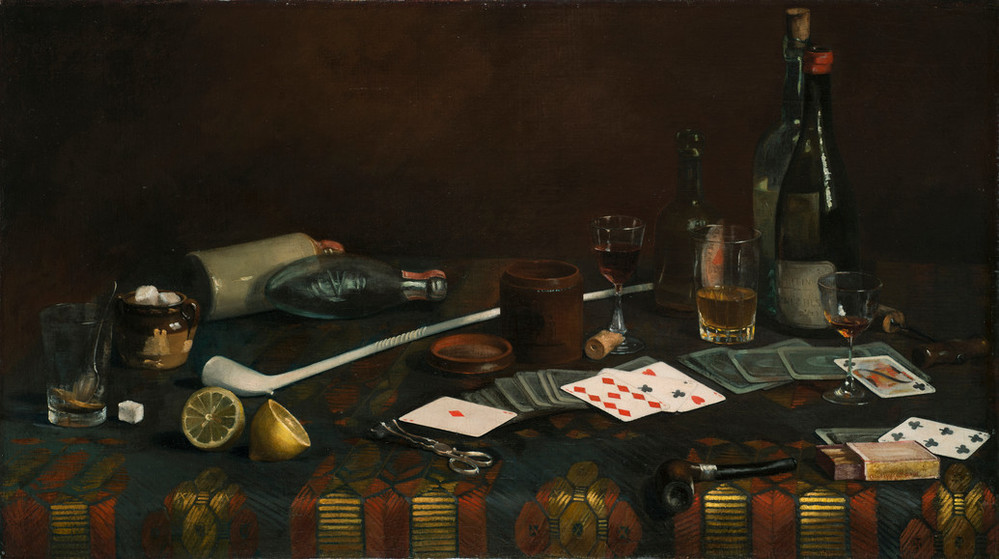 Commissioned for a Chicago men’s club, Claude Raguet Hirst’s A Gentleman’s Table subtly critiques masculine pastimes while still appealing to male patrons. The work’s hyperrealistic style exemplifies a traditional technique called trompe l’oeil, French for “deceives the eye.” At the time, trompe l’oeil works were typically painted by and for men. Hirst claimed the method as her own and refashioned it with messages appealing to female viewers. Her skill rendering tight contours, tonal values, reflections, and textures resulted in successful illusionistic images.

A Gentleman’s Table includes several bottles of alcohol and a corkscrew (with a cork still attached) to indicate that drinking is ongoing at this gathering. It is as if the table’s occupants have just stepped away for a moment and will return to finish their game and drinks. At the lower left of the painting the combination of glass, spoon, sugar cube, and lemon likely suggest the presence of absinthe, seen as a potent and potentially lethal liquor.

Whereas the trompe l’oeil paintings by Hirst’s male contemporaries cast masculine leisurely pursuits in a postive light, A Gentleman’s Table offers a discourse on late 19th century social ills. In Hirst’s hands, typical accoutrements, such as pipes, cards, and glasses, may allude to vices, including gambling and alcoholism, both ingrained in male culture at the time and of particular concern to many women of the day.

Claude Raguet Hirst was the only American woman noted for painting hyperrealistic still lifes at the turn of the 20th century.
View Profile