Close up of Mother’s Kiss 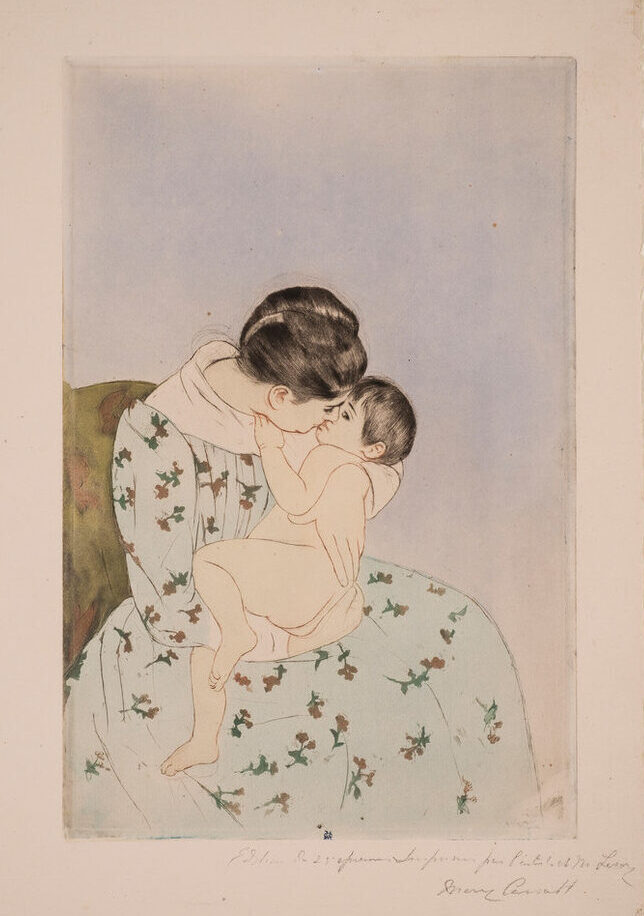 A prolific and innovative printmaker, Mary Cassatt created Mother’s Kiss as one of a series of 10 color prints intended for an 1891 exhibition at the influential Galerie Durand-Ruel in Paris. Cassatt had challenged herself to imitate the aesthetic of Japanese prints that she had seen on view in Paris the year before. The resulting series, which also includes The Bath, reflects the techniques and subjects Cassatt admired.

Cassatt skillfully evoked the tender relationship between mother and child through restrained handling of line, color, and pattern. A single line delineates both the curve of the mother’s left hand and the child’s left upper arm, visually emphasizing the physical and emotional closeness of the relationship. Like the Japanese prints she admired, her print features compressed space and limited three-dimensional modeling. These qualities further focus attention on the intimacy of the mother-child relationship.

Mother’s Kiss is one of many mother and child images for which Cassatt earned international renown. She initially experimented with the mother and child theme in the 1880s, inspired by the relationship between her sister-in-law and nephew. A decade later, Cassatt was regarded a specialist on the subject. Observing from real life, Cassatt developed the ability to capture a pose quickly, a necessary talent given the active nature of young children. Indeed, the child in Mother’s Kiss appears capable of wriggling away at any moment.

Recognized as one of the foremost 19th-century American painters and printmakers, Mary Cassatt is known for her prolific career and Impressionist artwork.
View Profile