Born Elizabeth Pantin, she was the daughter of the distinguished Huguenot silversmith Simon Pantin. Her first husband, Abraham Buteux, was a goldsmith from the French immigrant community. Elizabeth registered her first mark (the stamp with which smiths “sign” a piece, often seen alongside marks identifying the date and location of the work) as Elizabeth Buteux in 1731, presumably after her husband died. She carried on her first husband’s silver business as a widow until her marriage to another goldsmith, Benjamin Godfrey, in 1732. Upon his presumed death, Elizabeth registered a second mark as Elizabeth Godfrey in 1741.

The business dealings of Godfrey’s father and successive husbands indicate they were supplying the nobility with high-quality silverware, often with a strong French flavor. Godfrey was raised in the Huguenot tradition, derived from French silversmithing. The Huguenots were French Protestants who fled to England to avoid religious persecution, and they produced silver in popular French styles, such as Rococo. Godfrey had two periods of independent activity in widowhood, the second when the Rococo style was sweeping through the decorative arts of England and forcing artisans to adopt new styles. Her clientele remained loyal, providing evidence of her ability to manage a business and respond to the prevailing fashions.

This George II caddy was used to store tea, its small size evidence of how expensive and rare tea was at the time. The word caddy is derived from the Malaysian word kati, which designated a unit of measurement almost equivalent to a British pound. Tea was considered an exotic luxury item from China, so the scenes depicting tea planters and pickers on the... 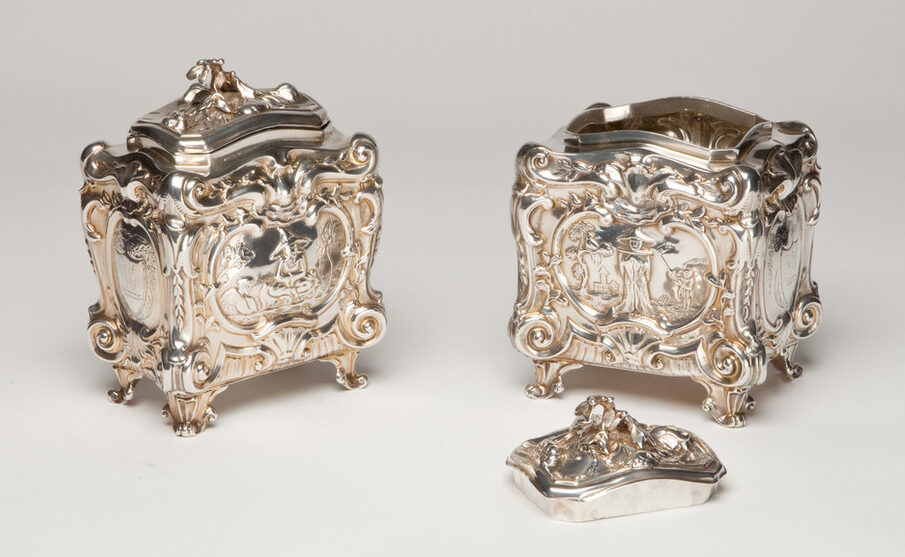