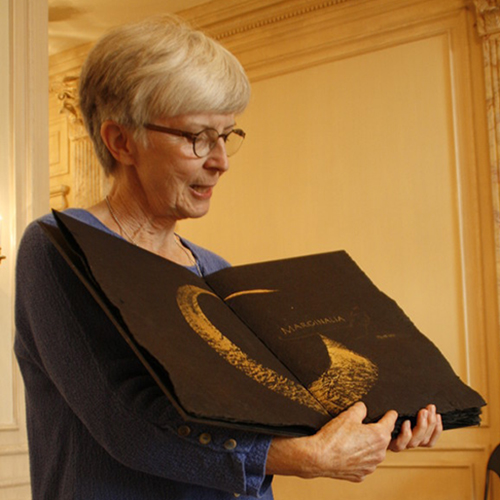 Owen grew up in Hastings-on-Hudson, New York. She graduated in 1969 from DePauw University in Greencastle, Indiana, where she focused on art and English. After moving to Bangor, Maine, she worked as printmaker and graphic designer.

With the birth of twin daughters in 1978, she began teaching herself calligraphy. She has since studied calligraphy and book arts in the U.S. and Great Britain and has taught classes for many years. Musically talented as well, she played string bass with the Bangor Symphony Orchestra until 1994.

Bound to Amaze: Inside a Book-Collecting Career

This focus exhibition celebrates the vision of Krystyna Wasserman, curator emerita, who assembled NMWA’s collection of more than 1,000 artists’ books over a thirty-year period.
View Exhibition: Bound to Amaze: Inside a Book-Collecting Career