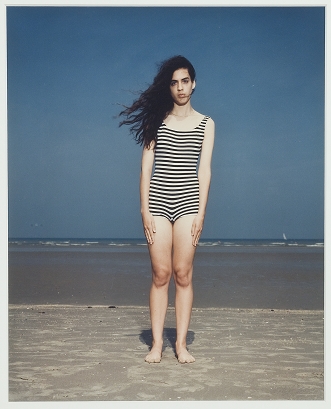 Sea to Shining Sea: Rineke Dijkstra’s cross-Atlantic look at teenagers in the early 1990s
Dutch photographer and video-artist Rineke Dijkstra is well known for her intense and intimate approach to portraiture. Her work, typically executed in a serial format, is predicated on people in a state of transition, particularly teenagers on the verge of adulthood. Giving minimal direction to her sitters, Dijkstra relinquishes her role as director of the scene—producing a photographic situation in which the subjects must reveal themselves or a version of themselves to the camera lens. The artist’s use of a 4-by-5 camera for her work requires a longer exposure period compared to smaller, conventional cameras and in turn requires great concentration from the sitter. This large-format camera also creates a sharp, highly detailed image, a feature that corresponds with the artist’s intent to showcase the subtle nuances of the subject’s facial expression and stance.
After several years as a commercial photographer, Dijkstra garnered international acclaim with her series entitled Beaches, 1992–96, a project that signaled a departure from her previously commissioned commercial works. The photographer traveled from the Netherlands to Belgium, Croatia, Poland, and the United States, with an aim at capturing a cross-cultural look at teenagers she encountered along the European and American shorelines. Throughout the series, Dijkstra positions one to three figures centrally within the picture frame against a neutral background: the sea’s horizon. The aesthetic Dijkstra established in the Beaches series pervades the majority of the artist’s later series and projects; she translated her minimalist compositions and conceptions to video by creating moving portraits of teenage club goers.
NMWA recently acquired four images from the Beaches series from the Heather and Tony Podesta Collection. Hilton Head, South Carolina, USA, 1992, epitomizes Dijkstra’s own sentiments: “I had thought people would be everywhere the same, but they weren’t. In Hilton Head, the bathing suits were more chic. The girls held in their stomachs. They wore makeup.”[1] Consistent with the series’ format, the two bronzed female figures—most likely a young mother and daughter—stand closely together on the sand, suggesting a sense of intimacy between them. The disparity in age underscores two different stages of female development: girlhood and womanhood. With folded hands and slight smile, the youth in a fashionable, flower-printed suit cocks her head to one side, revealing the onset of self-awareness at an early age.
Hilton Head, South Carolina, USA appears in stark contrast to De Panne, Belgium, 1992, where the European adolescent female in a black-and-white, boy-cut swimsuit assumes a rather erect posture, which is accentuated further by her hands held stiff at her sides. She confronts the viewer directly with listless eyes and a clenched jaw. Though the Belgian teen adopts a deliberate, contrived position, she still exudes the insecurity and hesitancy of a girl suspended between two developmental stages. Hilton Head, South Carolina and De Panne, Belgium, along with the other photographs from the Beaches series, exemplify the vulnerability and awkwardness inherent within the adolescent’s physical and emotional maturation.

Born in Sittard, the Netherlands in 1959, Rineke Dijkstra attended the Gerrit Rietvald Academy in Amsterdam from 1981 to 1986. She received the 2003 Citibank Photography Prize and the 1994 Werner Mantz Award for her achievements in photography. Dijkstra currently lives and works in Amsterdam.

–Lindsay Amini is an intern at the National Museum of Women in the Arts.