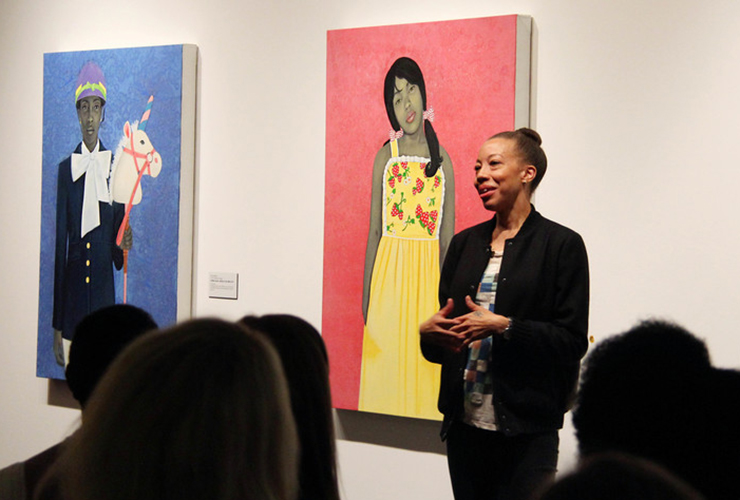 Amy Sherald speaks in front of two of her works as part of the Artists in Conversation series, 2017; Photo by Emily Haight, NMWA

Sherald, who was born in Columbus, Georgia, remembers being one of only a handful of Black students in the private school she attended. She identifies those early years negotiating issues of race and identity in the American south as major influence on her art.

She earned her bachelor’s degree in 1997 at Clark-Atlanta University. Concurrent with her studies, Sherald apprenticed with artist-historian Dr. Arturo Lindsay of Spelman College. She also participated in Spelman College’s International Artist-in-Residence program in Portobelo, Panama, in 1997. Two years later she helped organize and install international exhibitions in Central and South America.

Sherald soon relocated to Baltimore and went on to earn her MFA at the Maryland Institute College of Art, where she studied with Abstract Expressionist Grace Hartigan. Before Sherald moved to Baltimore, her art had a strongly autobiographical focus. Afterward, she shifted her attention to content that offered a critical view of African American cultural history and the representation of the African American body. In particular, she is known for using a grayscale to paint skin tones as a way of challenging the concept of color-as-race.

The well-traveled artist has done a private study residency with Norwegian painter Odd Nerdrum and completed additional residencies in Beijing, China, and Oranjestad, Aruba. Sherald’s works have been exhibited at Art Basel Miami and in group and one-person exhibitions in New York, Philadelphia, Baltimore, and Chapel Hill, North Carolina.

View All Posts About Amy Sherald