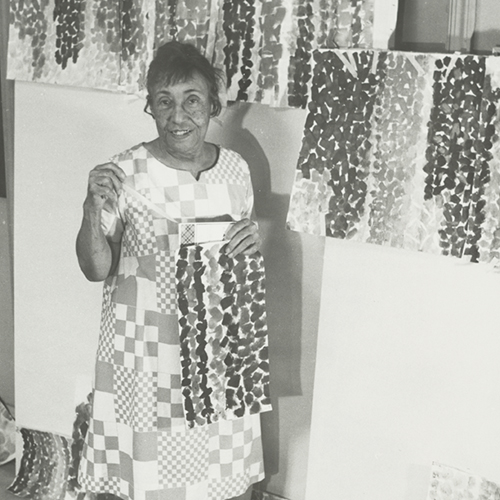 Thomas was born in Columbus, Georgia, the oldest of four girls. In 1907, her family moved to Washington, D.C., seeking relief from the racial violence in the South. Though segregated, the nation’s capital still offered more opportunities for African Americans than most cities in those years.

As a girl, Thomas dreamed of being an architect and building bridges, but there were few women architects a century ago. Instead, she attended Howard University, becoming its first fine arts graduate in 1924. In 1924, Thomas began a 35 year career teaching art at a D.C. junior high school. She was devoted to her students and organized art clubs, lectures, and student exhibitions for them. Teaching allowed her to support herself while pursuing her own painting part-time.

Thomas’s early art was realistic, though her Howard professor James V. Herring and peer Loïs Mailou Jones challenged her to experiment with abstraction. When she retired from teaching and was able to concentrate on art full-time, Thomas finally developed her signature style.

She debuted her abstract work in an exhibition at Howard 1966, at the age of 75. Thomas’ abstractions have been compared with Byzantine mosaics, the Pointillist technique of Georges Seurat, and the paintings of the Washington Color School, yet her work is quite distinctive.

Thomas became an important role model for women, African Americans, and older artists. She was the first African American woman to have a solo exhibition at New York’s Whitney Museum of American Art, and she exhibited her paintings at the White House three times.